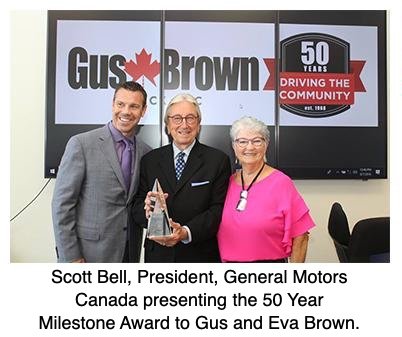 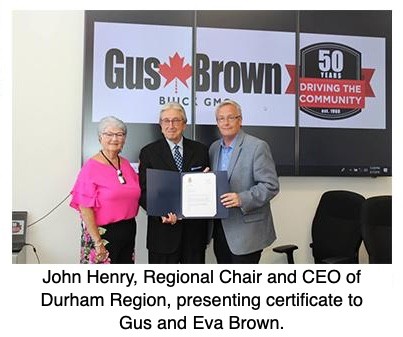 From General Motors production worker to prospering owner of a GM dealership, Gus Brown has quite a success story to tell.

It all began with a used car lot at the corner of Kendalwood and Dundas St. E., back in 1963. We had only nine used cars and a single string of outside lights, recalls Mr. Brown who worked long hours building up his business. Every time we sold a vehicle in those days, he says, we used to have to rush out and buy another one to maintain a variety for the customers. Later he formed a limited company under the name Gus Brown Motors.

In 1968, Gus acquired the General Motors dealership and opened up at 300 Dundas St. E. Whitby with 23 employees.

Today Gus Brown Pontiac Buick GMC employs over 70 employees committed to service excellence. “The key to success since opening has always been our employees”, says Gus. “It’s because of our philosophy of honesty and building trust that we have a strong repeat and referral business as well as attracting many new customers every day.”

“The industry today is much more specialized than in the past”, says Gus. The ongoing training and specialization are integral in today's dynamic environment and we are up to the challenge. We use state of the art training facilities for all of our departments. The training coupled with our online, web enabled systems provide us with real-time access to General Motors, the dealer network and all of our suppliers.

Our achievements include a 22 time winner of the General Motors Presidents Club/Triple Crown award, 6 time winner of the Jack Smith award given to the top 10 Canadian Dealers, as well as top GM dealer in Canada 2005-2009, 2007 Winner of the Peter Perry award for Outstanding Business over 50 Employees from Whitby Chamber of Commerce, nominated to the CADA Laureate Program 3 years in a row and consistent annual Reader's Choice award winner.

We recommend contacting us to make an Appointment !